The static analysis method used is Stiffness Method. In 13.0 Version, which makes 3-dimensional analyses, structural equilibrium equations for finding dx, dy ve qz deflections of story plan are constituted by assuming that slabs in horizontal direction have infinite rigidity. Therefore, by the assumptions of qz, dx, dy deflections in floors and dz, qx, qy deflections at end points of elements, equilibrium equations of the whole structure are constituted. The programme makes structural modeling automatically by defining structural data as plan application input. It also constitutes and solves equilibrium equations at once by considering rigidity of elements. Furthermore, it finds real effects in static analyses of structure and determines effects of soil collapses and rotations in rigid upper part of structure, taking into account structure-soil interaction. Since static analyses are 3-dimensional, it analyses grid or irregular beams in plan as finite elements and evaluates the results as a single beam. 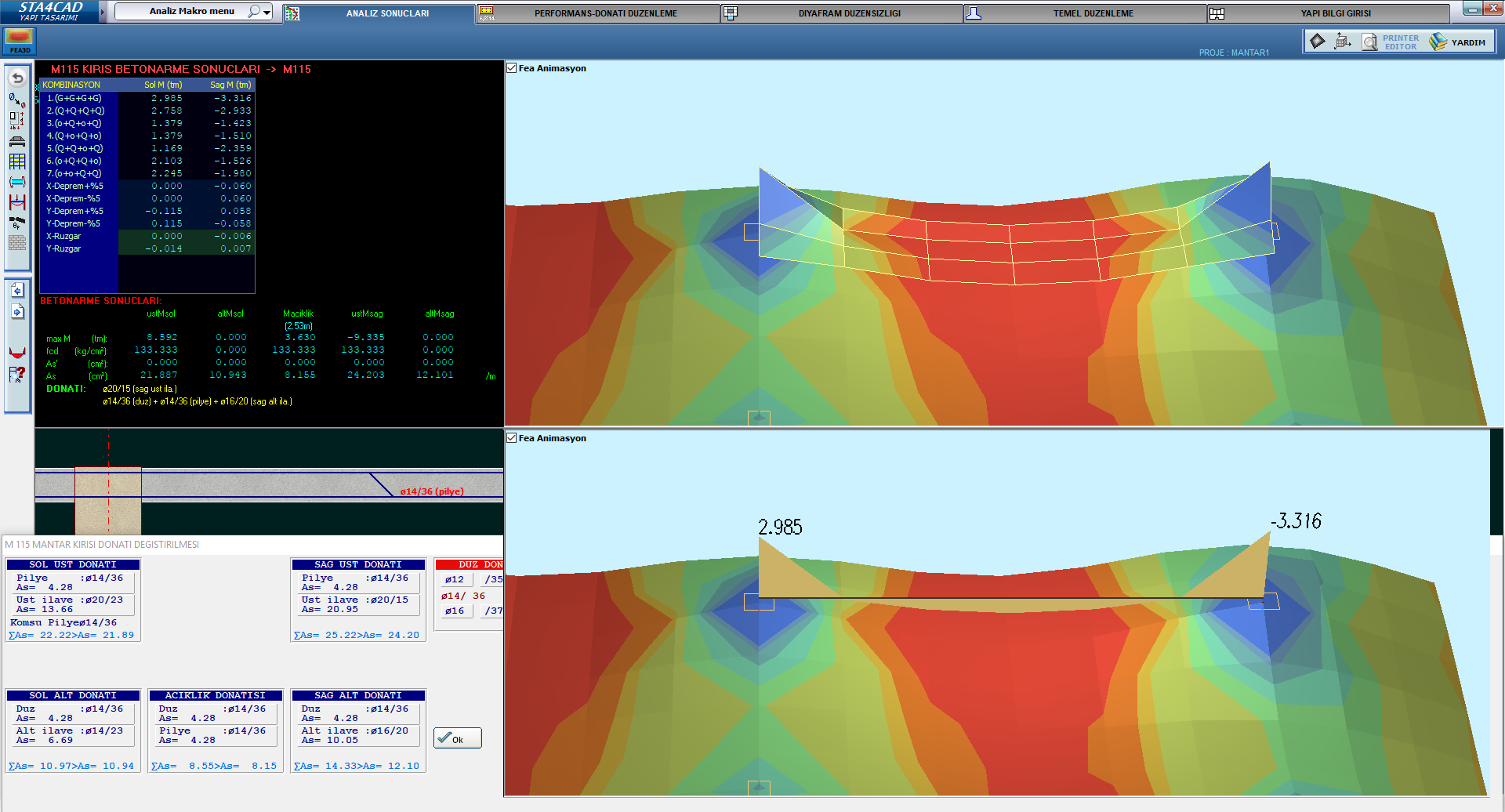 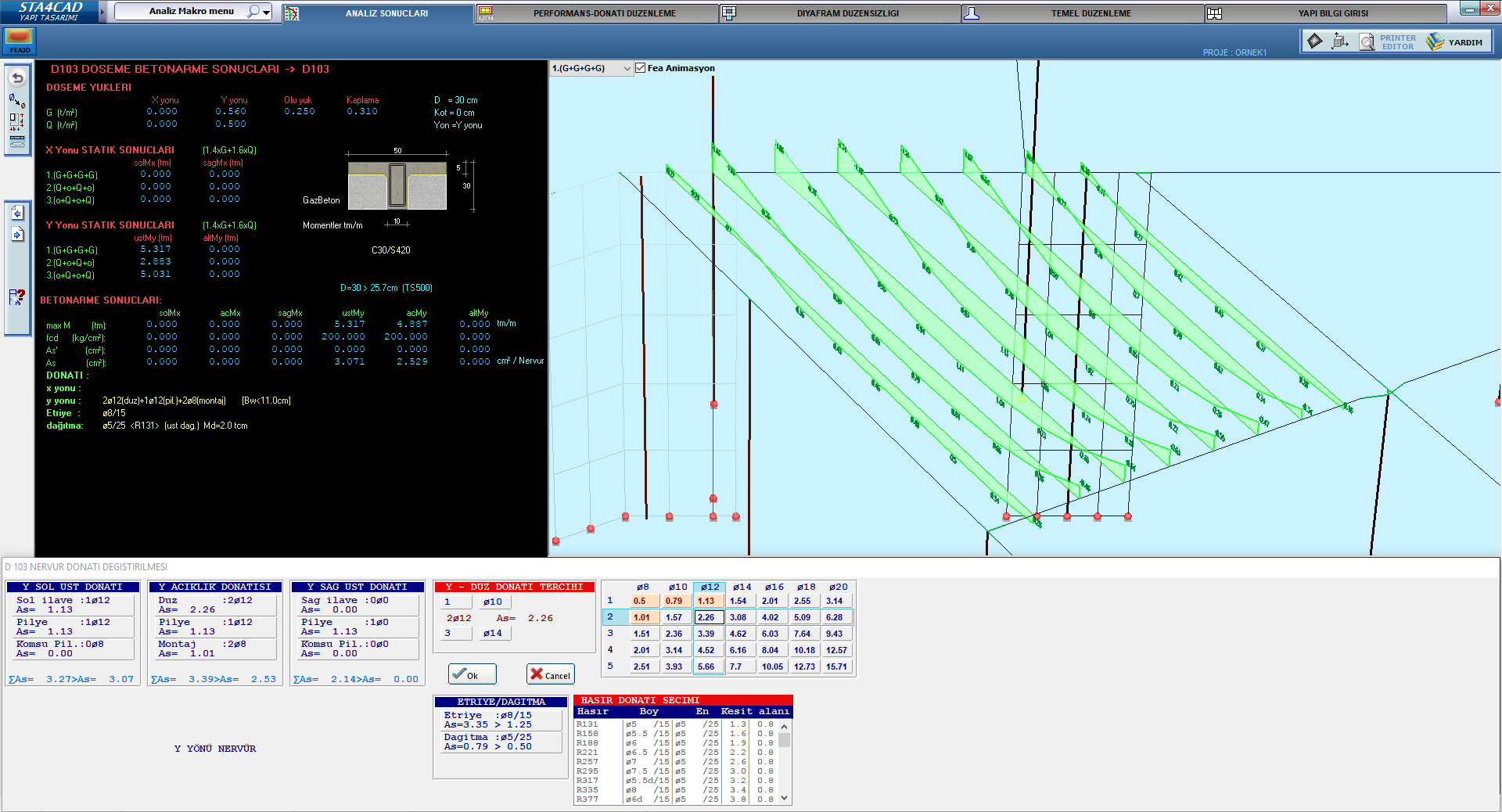 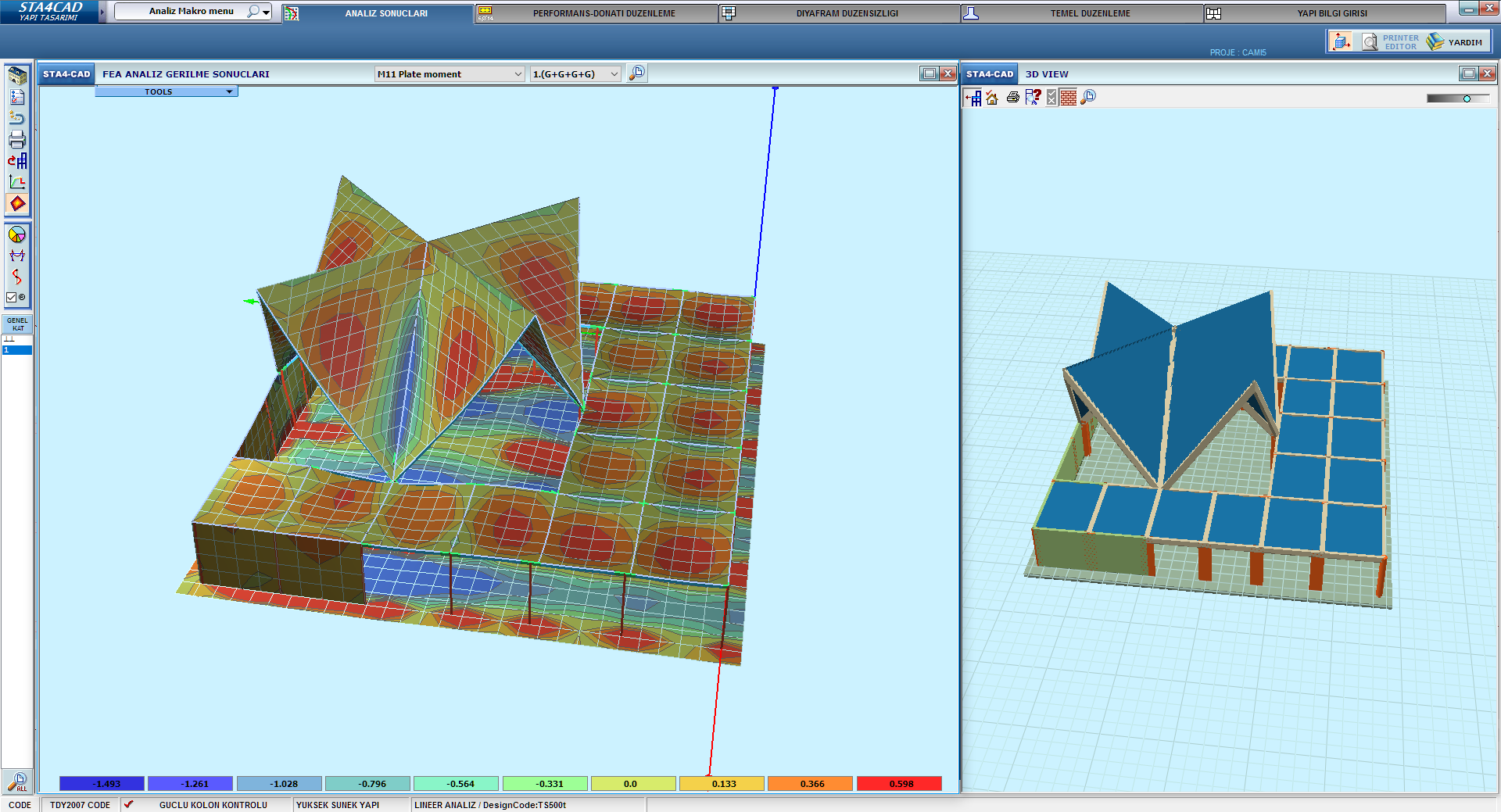 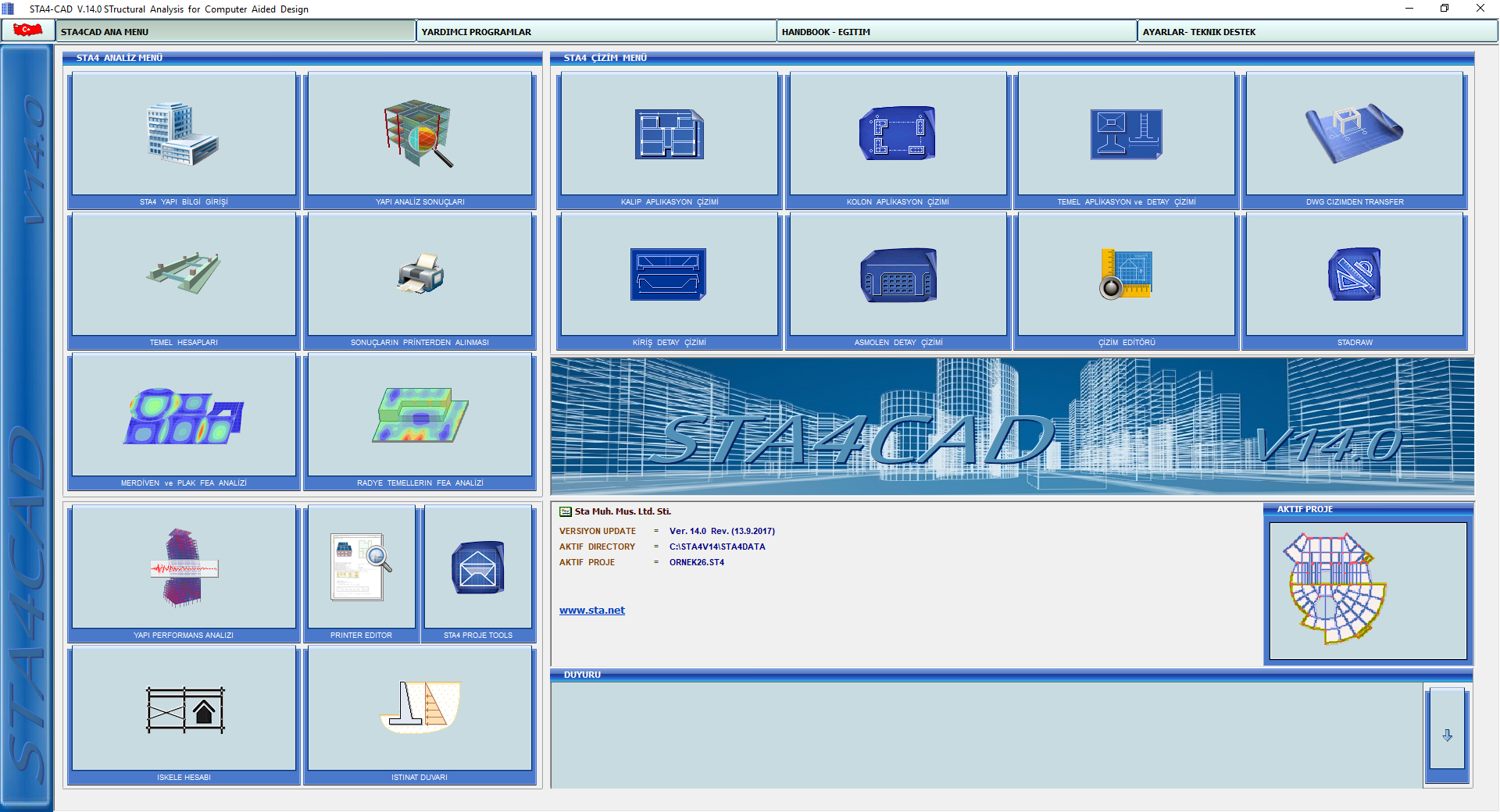 Structure modelling determines relationship of unit of measurement, loads, and elements accurately in irregular structures since elements are rigid and load distributions on floors are vectoral. Mostly used element types in structures are considered. Beams, which have smooth, prismatic, hunched, and variable sections or which rest on wide shear walls, are taken into account in stiffness and load matrices. 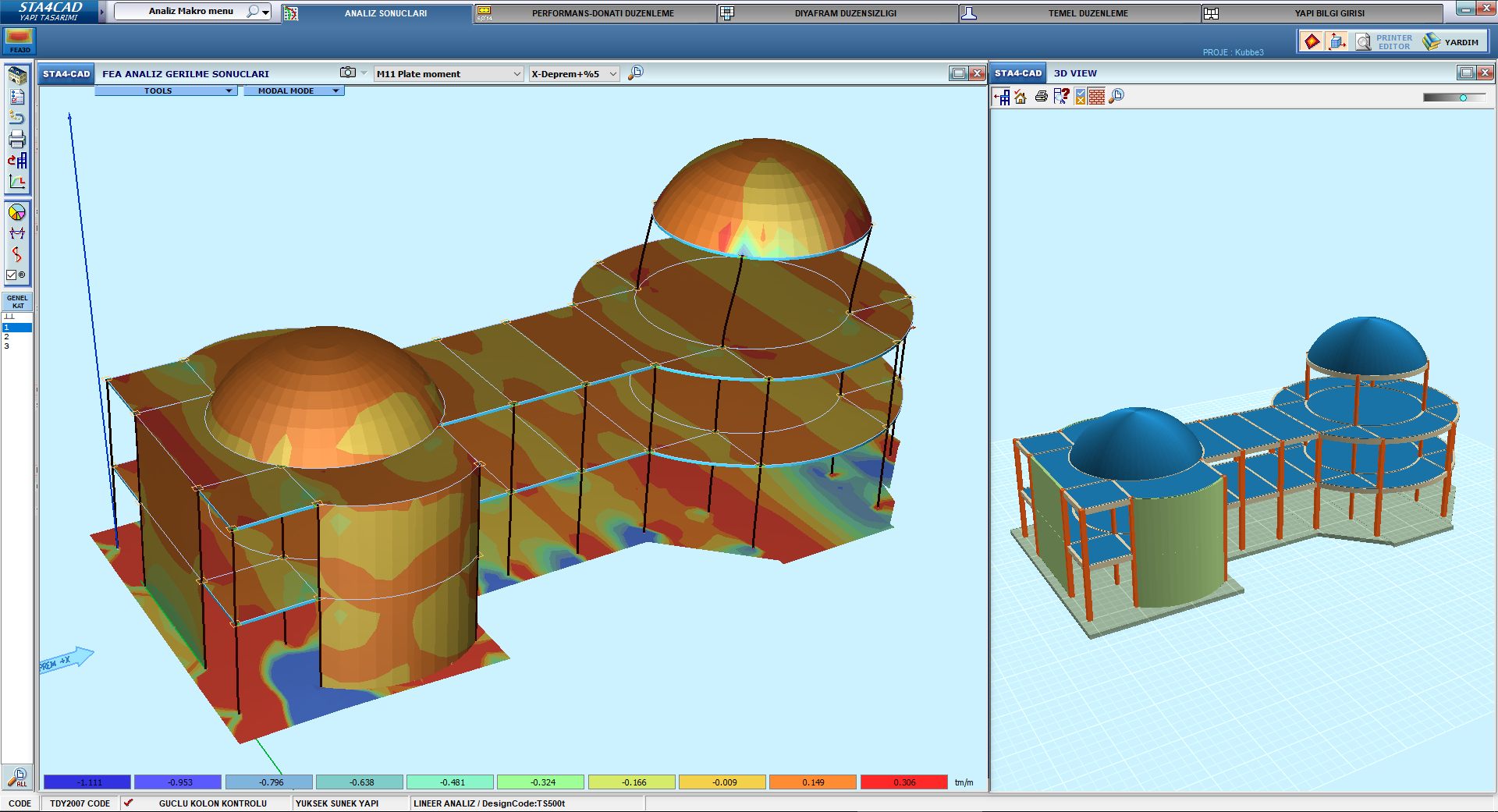 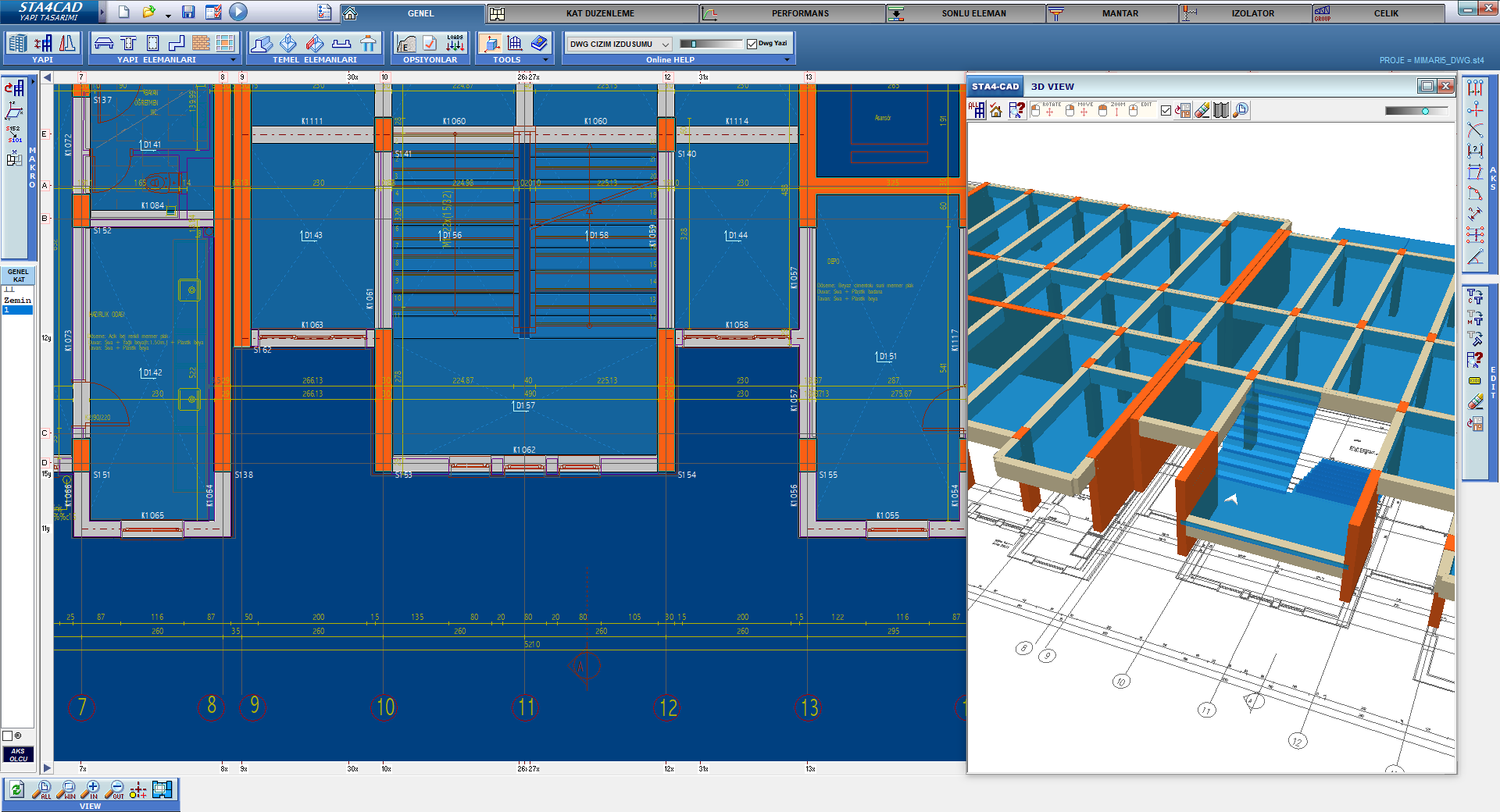 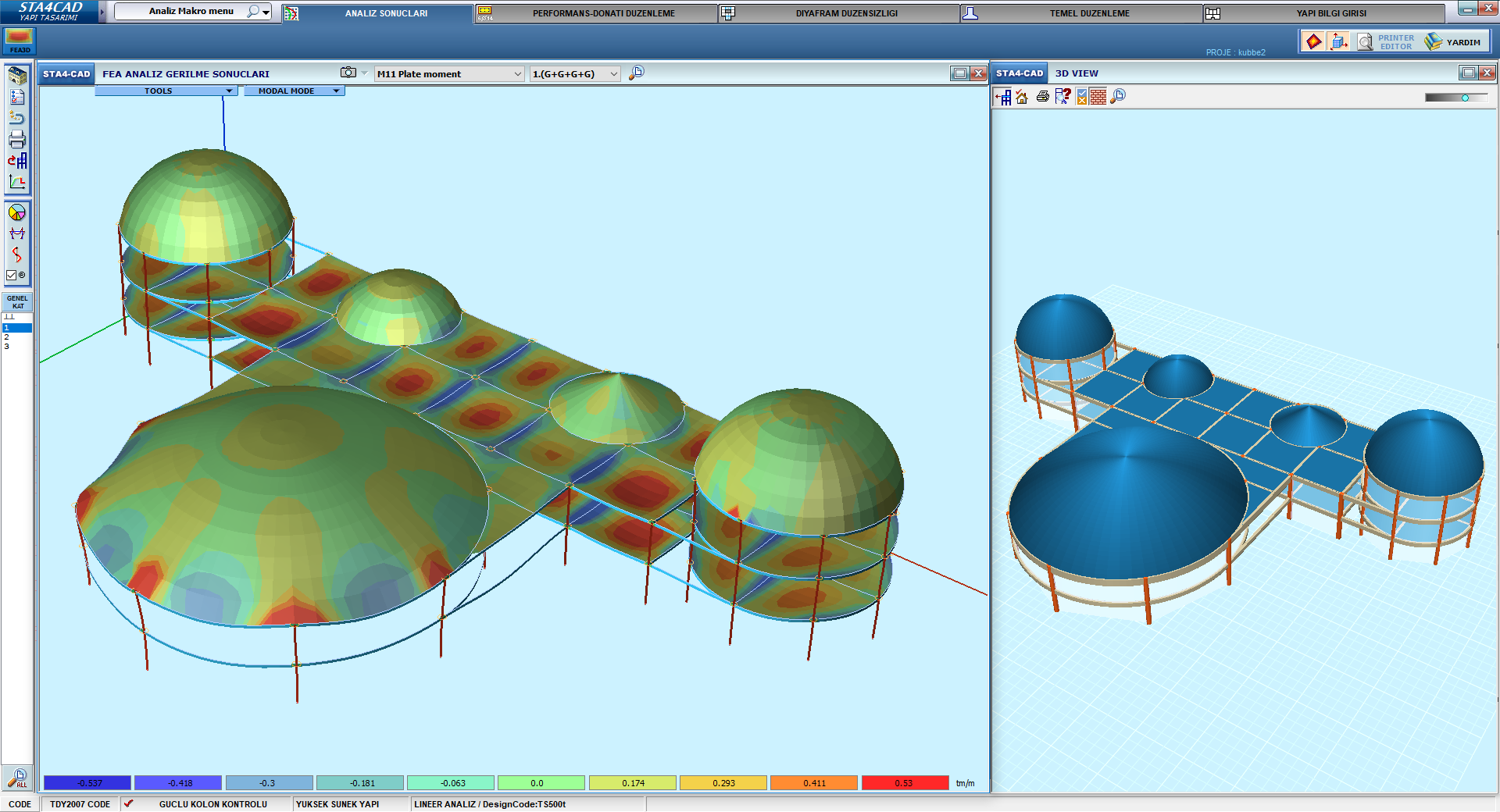 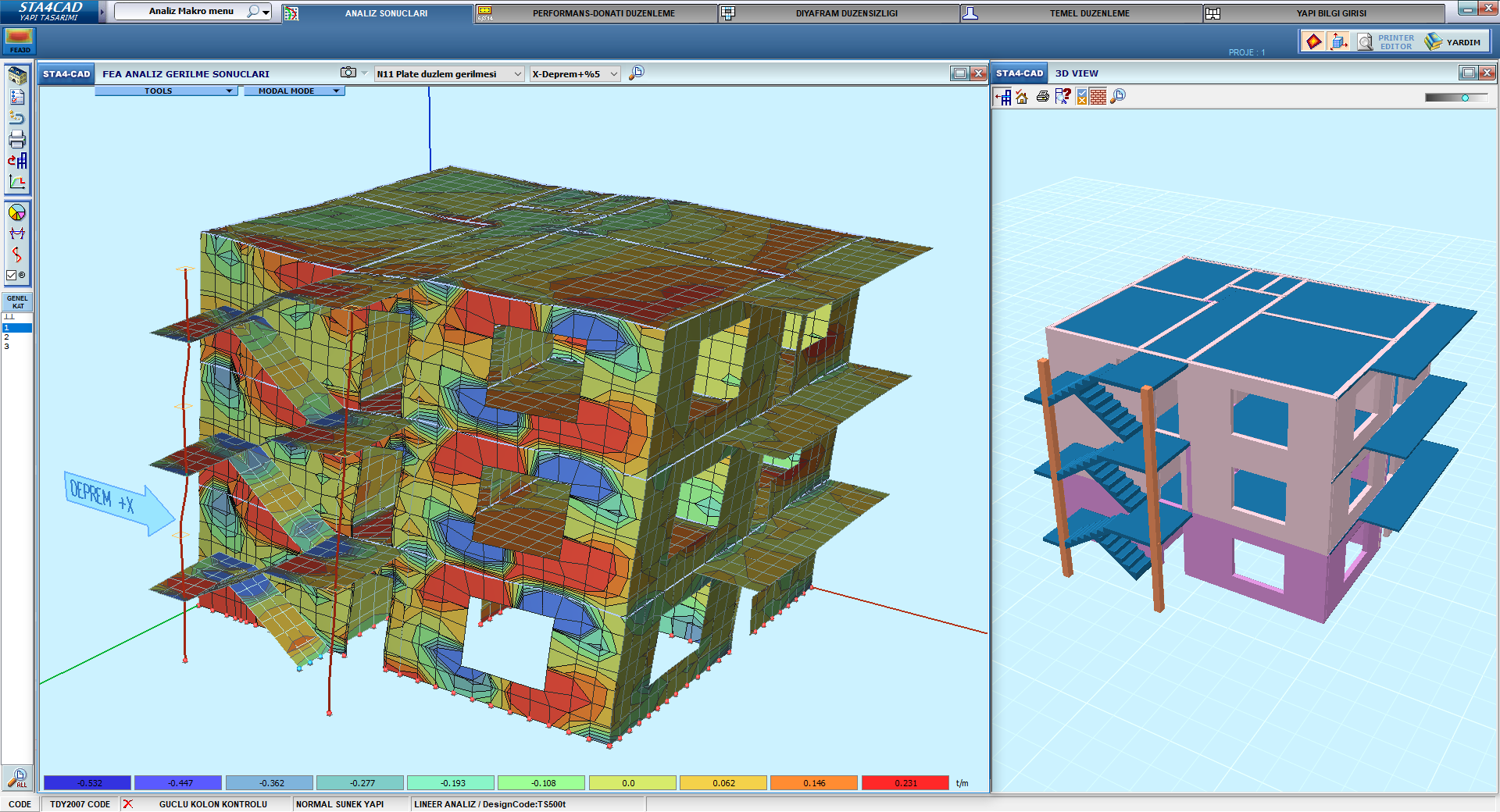 Rectangular, prismatic, circular and irregular (polygonal ) columns are separately defined. Stiffness values in column static analysis rigidities are arranged by checking shear walls for shear deformations. Floors which are irregular, ribbed, and formed of rectangles in large numbers are considered. Footings are analyzed both with and without interaction of structure, due to finite beam theory (Winkler Hypothesis) which takes into account soil behavior.

Earthquake calculations are made due to both earthquake code (equivalency method) and modal superposition (modal analysis). Dynamic soil speed spectra for different regions exist in programme library and can be changed by the user or new spectral values can be defined.

In programming, easiness of entering data input is as much important as soundness of scientific basis of theoretical principles of programme. Entering data input by a fast editor, which has a low error making frequency, and seeing floor plan on graphical screen in proportion with entered input provide the user with easiness in using the programme.

Input definition of STA4 programme is prepared by floor application principle. Entering data input for every floor is separate. Similar data between floors, in floors, and in symmetrical structures can be easily copied, thus whole structure can be formed by a very little data input. Data, which is entered completely in graphical environment and by the help of mouse, can be seen graphically. Data keys and intelligent user menu, which brings keyboard usage to a minimum, can be used. Data can be transferred easily since 65 keys can be controlled at the same time.

Analysis of results, optimization and arrangement of bars can be observed visually on graphical screen. Since printer is mostly graphical in new version, output is sent directly to printer. Output can also be optionally taken as graphical output. Drawings can be taken automatically since input is defined by floor plan principle. Data can be arranged interactively in drawings. Moreover, correcting, erasing, defining units of measurement, adding functions can be easily applied on drawings, which are automatically produced by the programme, by using the drawing editor.

Reinforced concrete structures, whose analyses consume too much time and money, can now be designed economically by making use of computer technology. Since static and reinforced concrete calculations are made by computer, engineer has enough time to spend on structural modelling which is of high importance. Although structural modelling depends on experience, different structural models can be formed easily by the help of computer programs. that serve for right goals and depend on sound theoretical fundamentals.

STA4 programme is prepared for orthogonal and non-orthogonal structures, for example houses, commercial buildings, etc., shifted floors, and stepped structures. Vertically inclined elements are not considered. STA4 programme has been developed from 1976 to 2009 by practice. Its theoretical principles depend on international scientific theories and its usage is very practical. It is first prepared by Fortran IV, then developed by PDS+Assembler language. Its 13 .0 version is completely Windows adopted.